1905 was a year of possibilities in the literary world. Upton Sinclair's The Jungle came out in serial form, O. Henry's The gift of the Magi was published for the first time, and both Edith Wharton's The House of Mirth and Frances Hodgson Burnett's A little princess were published in book form. In this same year, publishing companies were forming after several big name companies started to merge to sustain themselves, such as the Lothrop Publishing Company and Lee & Shepard merger into the Lothrop, Lee and Shepard Company. The Stitt Publishing Company came into existence in 1905 and, unfortunately, only lasted this single year (or did they? More on that later).

I first encountered Stitt Publishing Company when I was cataloging Abroad with the Jimmies by Lilian Bell for the American Trade Binding Collection. We already had the 1902 publication by L.C. Page & Company digitized (with a cover design by Amy Sacker), but since this copy was a variant binding,  was published later, and also had a different publisher and binding designer, we decided to add it to the digital collection as well. It's a beautiful little book with a cover design by the Decorative Designers. 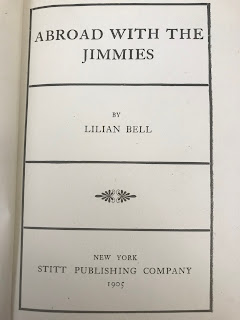 Prior to joining forces, each man was well established in the publishing world. Scammel had done work for Brentano's before this and was already stationed in Chicago.1 He knew the town and he knew his competitors and allies which made him a good business partner in that part of the country.

Stitt had already networked in New York and had several ties to the publishing industry. He rubbed elbows with the Frederick Stokes Company, Saalfield and Fitch, as well as the Mershon Company (bet you couldn't have guessed that last one).1

Publishers Weekly gave rave reviews of the up and coming company stating in 1905, "Starting with a large line of desirable books their success seems a foregone conclusion."1  The firm issued around 80 titles in 1905.

Soon the company started experiencing problems. In the February 10, 1906 issue of Publishers Weekly, there was one small paragraph on page 672 beginning, "W.M. Stitt, Jr., has sold his interest in and resigned his position as president and general manager of the Stitt Publishing Company, which is to be wound up and go out of existence as a corporation."2 Just 8 months later the Mershon Company sold their company to Chatterton-Peck Company, effectively ending that portion of the company as well.3  In the March 7, 1908 issue of Publishers Weekly, we learn that there was a case involving Chatterton-Peck Company, Stitt Publishing Company, The Mershon Company, W.L. Mershon, and Edward Stratemeyer. The case started in October 1907 and ended in March 1908.4 It appears Edward Stratemeyer sued Mershon and Chatterton-Peck Company, probably for copyright of his books.5,6

What happened in that single year to make this seeming dynamic trio dissolve their company which held so much promise? Perhaps Stitt decided he didn't want to acquire Mershon Company any longer or vice versa. What we do know is that both companies continued to publish under their respective company names after the joint company dissolved in 1906 which is why you will find some Stitt and Mershon imprints after 1905.

After dissolving the company, the trio went their separate ways. William M. Stitt Jr. become the American agent for Blackie & Son, London, The Pub. Co. of Buffalo, N.Y., and for Berger Pub. Co.7

Joseph Scammel went on to work for Gimbel Brothers out of Philadelphia as a manager of their book department.8 In 1915 he left that firm and took a position with the mail order corporation Charles Williams Store Co. out of Brooklyn to organize and manage a book department for them.9

This work is licensed under a Creative Commons Attribution-NonCommercial-ShareAlike 4.0 International License.